How to replace the LED in Robosapien’s hands. You’ll need to remove the hand(s) as attempting to replace them while still in the robot would be very difficult if not impossible. 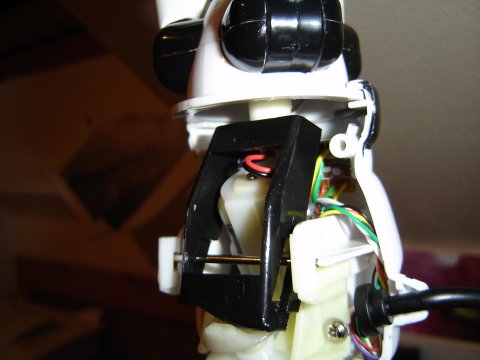 In order to remove the hand:
first loosen (you do not need to remove it) the screw shown.
Shuffle the plastic retaining piece the screw was holding down such that the metal rod can fall out.
This frees the “actuator” (the black plastic rectangular piece).
You can now remove the hand, be careful when disconnecting the wires that you don’t take the socket with the plug (which it tried to do in my case).
See below for details on replacing the LED.
If you want to switch the left with the right hand repeat the above on the opposite arm but remember which actuator came from which arm (they are specific to the arm, not the hand).
To replace the hand reverse the steps, remember to plug the wires in (they are colour coded AND the PCB has the labels).

How the “actuator” works:
as the forearm is rotated outwards by the motor the cam (the strange shaped wheel attached to the gearbox) pushes the actuator out (away from the elbow) which opens the hand. The hand is sprung such that when the cam moves back the fingers close.

The “grip” of robosapien’s hands are therefore dependent on the spring and not the motor, however if you added a stronger spring (with the intention of increasing the grip) the elbow motor will need to work harder in order to open the hand. As the elbow motor serves two functions it is likely that this would mean that robosapien may not be able to fully extend his arm (and subsequently open his hand). 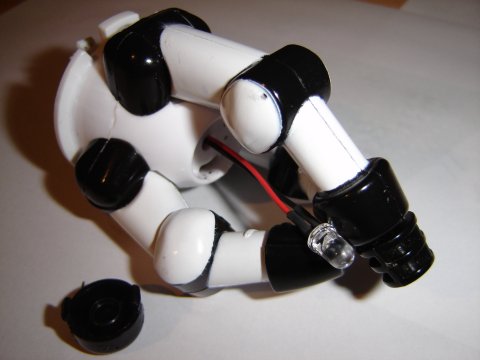 With the hand removed (I wouldn’t recommend trying this with the hand still attached although it may be possible) you can persuade the black cover off (which holds the LED). It is now possible to replace the LED for one of a different colour, e.g. blue or red.
Don’t forget the polarity of the LED (which leg runs to the black lead and which to the red)! 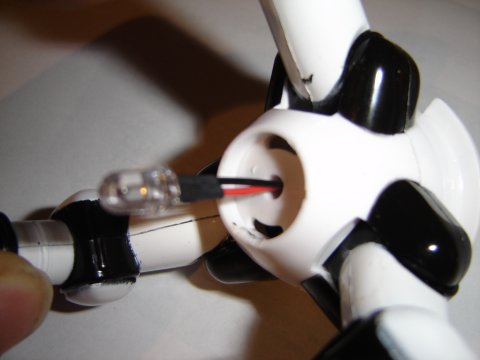 This photo should help understand how the black (LED) retaining piece is held in place. I persuaded (levered) it out with a small screwdriver (1.4mm head) but be careful not to scratch the hand too much (as I did, doh!). 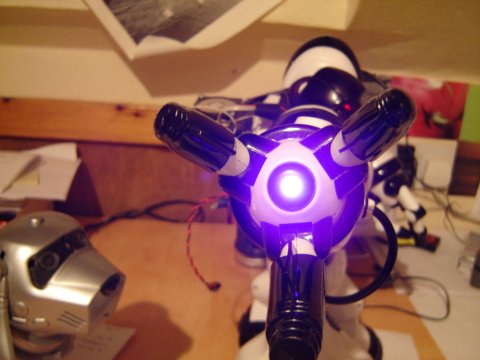 I removed the current LEDs and replaced it with Violet LEDs. Violet was chosen as Maplin didn’t have any Hyper blue, blue, hyper ultra-violet, ultra-violet or hyper violet LEDs in stock (my choice in order of preference), talk about narrowing down the choice a little! 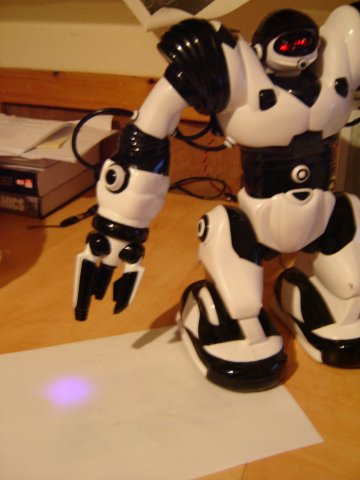 Although this isn’t a “super-bright” or “hyper-bright” LED the output is pretty reasonable, as demonstrated by shining it on the paper. 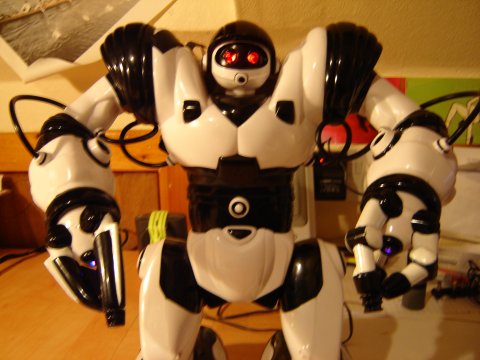 Both hands with Violet LEDs. Simple but good mod I’d say. Tempted to do the same with the eyes although not sure about colour.